Parga’s Castle: At the right side of the city locates the castle on the top of a small hill. Visiting the castle you have the opportunity to travel through the ages to another era. The view of the city and the Ionian panorama offers a unique experience.

The castle was built at the 14th century with the help of Normans in order to protect the citizens of Parga from the pirates. The final form is taken from the Venetian after a number of disasters.

Ali Pasa’s Castle: North of Parga -in Anthousa village- locates the Ali Pasa’s castle. Built on the top of a large hill, the castle has a view to an amazing sunset to Ionian waters.
The castle is very well preserved, almost intact and the visitor who walks through its alleys can easily imagine the life style of the people who lived there hundreds of years ago. It was built by Ali Pasas with the help of an Italian mechanic (Montoleone) in order to oversee and control Parga.

Beach & Church of Agios Sostis: Only 7km away from Parga or 20 minutes by boat is hidden the beach of Agios Sostis.Secluded and beautiful with turquoise waters and picturesque rocks in weird formations.

Above the beach is the chapel of St. Sostis, one of the most peculiar churches in Greece. Built in the indentation formed by two huge rocks, one of which serves as a protective wall.

The church seems to fit perfectly in the landscape and the visitor is impressed by the sudden dramatic entrance of the giant rocks. A natural stair is carved into the rock and leads from the chapel straight to the blue sea.

Alonaki Beach: There are many beautiful beaches around Lichnos and Parga and they definitely meet all tastes. But one of them boasts of beauty. Alonaki beach is an exotic place with water in all shades of blue and turquoise and rocks covered with pine trees almost touching the water.

The bay is small and protected and because of this the water is always hot. A huge rock -fallen once from above- stands in the center of the bay tempting the swimmers to reach it and rest on its flat surface. 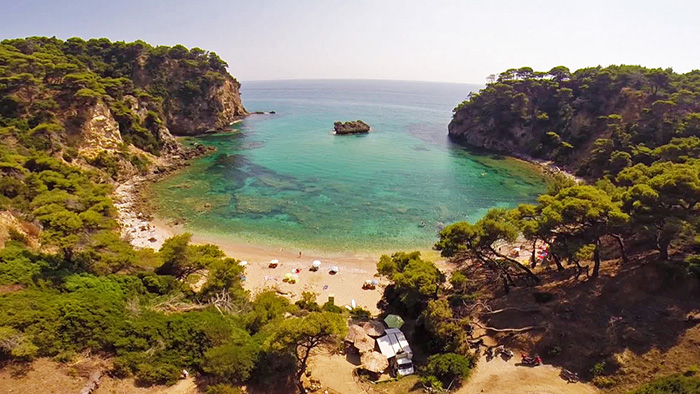 Alonaki was used as a landing point for the allied forces during the Second World War. Today we can still see the layers of concrete on the beach indicating the crucial geopolitical position of the beach in the Ionian Sea. Alonaki is a protected beach where is prohibited any human intervention ,including  camping, because of the great natural beauty.

Necromancy: The Ancient Necromancy locates at Mesopotamos village in Preveza, about 20 km from Lichnos. It was buried under the existing cemetery and the monastery of St. John of the 18th century and was revealed in the excavations of 1958.

Its architecture resembles to a magnificent funerary monument or mausoleum of the 5th century. It consists of polygonal masonry,steel gates,interior hallways and  the main temple which is divided in 3 rooms. Below the central hall of the temple is the underground hall which is carved in the rock. It was deliberately constructed to create the guests strongly psycho acoustic phenomena.

So the ancient pilgrims, with the help of priests, could contact with the souls of the dead asking them advice and information for the future. The Necromancy of Acheron is a unique monument and the only place where the ancient visitors had  the chance to communicate with the underworld. 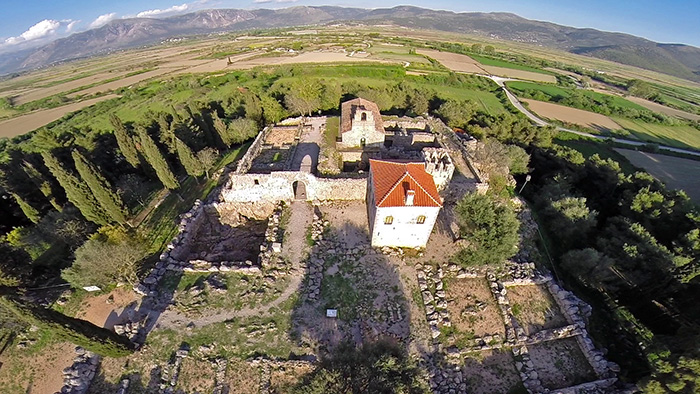 River Acherontas: Sources There are places that words can’t describe. One such place is the breathtaking canyon of Acherontas. The river and its canyon attracts tourists from all over the world. It’s full of mystery and famous as the destination of the dead . Everyone knows the river where the gates of Hades are waiting for the souls to be  led to the eternal underworld. Acheron is a mystical river of such natural beauty that few places can compete with it.

We highly recommend a trekking trip in the Strait of the river where crystal clear water is running between vertical cliffs over 100 meters high.

For those who love adventure there are trips in and out of the river (river trekking or hiking) with rising degree of difficulty. The hikers can walk deep in the canyon under the deep shade of huge trees and the lush vegetation until they cross the gates of Hades and Persephone’s Palace. Here anyone can understand why Greeks chose this very wild and majestic scenery to place the entrance to the underworld.

The equipment someone needs to cross the ‘Gates’ is very simple. Just a swimsuit and a pair of shoes that fits securely on the feet (sportshoe or rubber). And of course a certain resistance to cold because the icy crystal water reaches the knees when walking. The brave hikers must know that there are a few points  along the river that they may have to swim a little bit.

Acheron river belongs to the European network of protected areas Natura 2000  because of its great beauty and ecological value.

Embouchure: Equally beautiful trip can be done by boat in the estuary of Acherontas where the visitor has the opportunity to admire an area of unique natural features such as swampy areas, bays with sandstone formations and especially the coastal ecosystems where live many rare and endangered species and Plants.